Some things are meant to be learned by going through the same situations again and again. And it doesn’t get any better than when we have our friends join us in the journey. Photo courtesy of Augusto Getirana.

Since the early 1990s, the learning of Surfing in the city of Rio de Janeiro has been witnessing a dramatic set of changes in regard to its pedagogical context. Not only has the profile of beginners become a broader one – particularly in terms of age, intimacy level with the surf and physical fitness –, but also the learning frame has been suffering a severe modification, as in many cases the learning style seems to have been shifting from yesterday’s numerous groups of beach-skilled kids – that used to undergo an incessant exhausting trial-and-error process all together – towards inexperienced individuals accompanied by someone else whose primary goal is to guarantee their safety and ease the environmental hazards. Under these circumstances, it is important to address how such change in the learning style might contribute to the arising of deficient surf goers, and what could be fostered in order for this tendency to be minimized.

The advent of Brazilian surfing schools occurred in Barra da Tijuca in the year of 1992. Since then, the context in which the learning of Surfing would take place seems to have been profoundly altered. Above all, what seems to have led such phenomenon the most was this new belief that, all of a sudden, now it was possible to dramatically shorten the length of time and effort one would need in order to stand up on a surfboard and surf a wave.

Not accounting for other immediate consequences of this new way of approaching the learning of the sport, after a while it became clear that, no matter who you were, people from all walks of life seemed to be closer to becoming part of this new surfing world. If a good age to start with surfboards was formerly considered to be anywhere between 8 to 11; if it was formerly natural to agree that those kids ought to be already good bodyboarders, shorebreak bodysurfers and longtime beachgoers by then; and if it was formerly understood that physical fitness would represent a vital prerequisite for such endeavor; suddenly all those certainties seemed to be tossed away: miraculously, someone had come up with a formula that would enable us to squeeze that entire exhausting process into a much less painful one-lesson plan.

Prior to that, kids in Barra da Tijuca would group together and head to the beach every single day of the week, to spend as many off-school hours as possible, besides also practicing skateboarding, being really acquainted with the surfing culture and talented in other wave and beach recreational sports. And they would mostly rely on their older brothers – Barra da Tijuca was full of prime surfers ages 14-18 in that time – for models as to which performance they could aspire for. In contrast, today many beginners seem to be much rawer, lacking the company of close peers, the surf experience and the ability to observe and identify several key aspects in the surfing performance of trained surfers. And in the case of today’s private surfing lessons, quite often the instructor finds him/herself in a position that calls for the use of fins, rather than a surfboard, to work the apprentice’s way through the surf and into the wave more easily and in case a safety action is required.

Presuming that (1) being with others of equal standing, (2) counting on a solid background in the sport’s dynamics and its environment, and (3) having the chance to consciously observe and fully benefit from experienced surfers in action, would most certainly be considered fundamental aspects to a thorough formation in the sport, it is important to realize that other pedagogical measures are likely to be necessary in today’s modern teaching models of Surfing, when dealing with less predisposed candidates. Taking into consideration that the surf is a wild environment, being able to accompany your apprentice as equals – each with a surfboard, paddling out and paying attention to nothing but the waves – is a luxury, and for that maritime autonomy is basic. So several other issues may need to be stressed before these beginners can be considered ready for the action. My team and I have come up with the following order of teaching units, as a methodological proposal to aid surfing schools teach that which was to be initially regarded as natural: (1) familiarization in the liquid environment; (2) marine aspects that influence surfing; (3) physical study of waves; (4) maritime swimming; (5) maritime swimming riding waves (bodysurfing); (6) terrestrial familiarization with surfboard; (7) maritime familiarization with surfboard; (8) maritime swimming with surfboard; (9) maritime swimming with surfboard riding waves (surfing); (10) transversal themes. For more details, visit our tech book’s page: https://surfingpedagogy.com/the-book/.

This site uses Akismet to reduce spam. Learn how your comment data is processed. 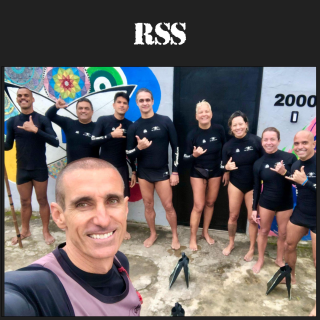